Mr. Benoit Gaudin, the Attaché for Academic & Linguistic Affairs of the Consulate General of France in Hong Kong and Macau, visited our school on 12 October 2009. He was interviewed by six French students. He was impressed by our students who eagerly learnt French and was delighted that our students could speak French fluently. It was wonderful to meet Mr. Gaudin at our school.﻿

Mr. Stephen Lam, an artist and comedian from Lyon, conducted two drama workshops for our P.6 French students on 30 October 2009. He used the song "Rame, rame, canoë'' to teach us how to sing aloud, draw audience attention and to demonstrate the techniques of singing aloud. We participated in different exercises on how to sing on stage.

Madame Touzard, author of the book “Going Green in Hong Kong”, visited our school and was interviewed by our fellow students on 17 November 2009. Our School Tour Guides showed her around the library, the Environmental Room and the motorwind system. She was impressed by how our school had made an effort to save energy. In the interview, she showed us simple ways to Reuse, Recycle, Reduce & Replace (4Rs).

With the support of the French Consulate and the Hong Kong Association of French Teachers, the Diocesan Boys’ School Primary Division presented Le Concert de Noël Français on 17 December 2009. Le Concert was intended for primary school students learning French as a foreign language in Hong Kong.

22 of us joined the concert. We prepared 2 songs “Chanson pour les enfants l’hiver” by Jacques Prévert, and “On vous souhaite un joyeux Noël”. The concert gave us an opportunity to perform in French and unique exposure to French culture.

Sophie Houen, a professional storyteller, conducted a storytelling workshop on 29 January 2010 in our school theatre. All of the P.4-6 French students had a wonderful experience with Sophie and enjoyed the workshop very much.

Sophie narrated a story in French by acting and showing us pictures to give us a better understanding of the story. She was really dramatic and we appreciated her effort. Ms Sophie's story was interesting and held our students’ attention. Everyone was entertained and enjoyed the story. What a meaningful workshop! 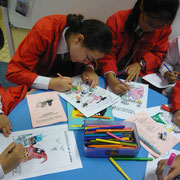 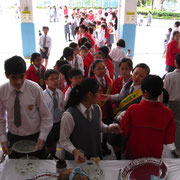 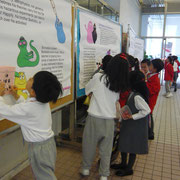 This year’s French Week turned out to be a blast! The theme was ‘Barbapapa”, a French cartoon. Thanks to the French teachers, students had the chance to try delicious pancakes in the covered playground! We also had lots of fun playing French games at the game booths. In the French room, students showed their artistic sides by colouring pictures of ‘Barbapapa’. Their masterpieces were then posted on the boards for everyone to admire!

Our French teachers also made a great effort to show us how to save the environment through watching episodes of ‘Barbapapa saves the Earth’!

Pancakes were served at the covered playground, and students enjoyed the “crêpes” very much in the recess.

For the third consecutive year,16 students from S1 to S4 took part in the annual French Exchange with our French sister school, Externat St. Joseph – La Cordeille, in the southern French city of Toulon, during the Easter Holidays. This year, we stayed in Toulon for 9 days, where students were completely immersed in French language and culture through home stays with their correspondents. In the morning, students took French lessons to strengthen their language skills, and in the afternoon, went on excursions to discover the culture and beautiful scenery unique to this southern region of French. After over a week in Toulon, students were sad to bid farewell to their correspondents, but also a little excited as more adventure awaited us in Paris. We took the TGV (High Speed Train) to Paris where we stayed for 4 days. There, we visited world famous monuments such as the Eiffel Tower, the Arc de Triomphe, and the Notre Dame Cathedral. We spent hours exploring the Louvre museum, discovering art treasures from around the world, and on another day, a visit of luxury to the Palace of Versailles where we admired the grandeur in which French kings used to live. Shortly after our arrival back in Hong Kong on 8 April, we welcomed our French correspondents from our sister school, which comprised of 21 students and 3 teachers who came to Hong Kong to strengthen their Putonghua. This study exchange has proved to be a valuable experience for students in both countries as they not only exchanged their language and culture, but also formed life-time friendships.

During the Easter Holiday, a group of 14 primary students and 3 teachers travelled to France for 10 days . We stayed in a small village called Méaudre and enjoyed lots of different activities. We went skiing for four days and all our students passed skiing certificates on the last day.We had a taste of the local cuisine and we had the opportunity to shop for souvenirs and local products. Last but not least, students got to practice their French on a daily basis as we were mixed with students and teachers from our sister school in Hanches. Ou return to Hanches after our ski tour allowed our primary students to discover French life with host families there. Quelle belle vie! 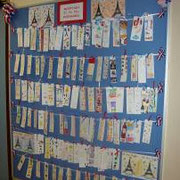 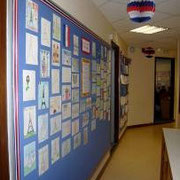 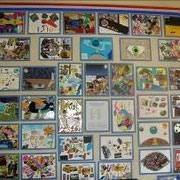 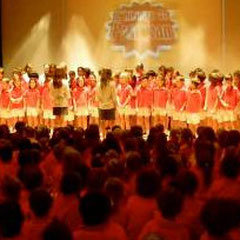 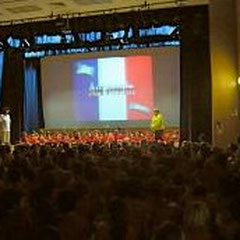 This year, we celebrated the French Days on the 25 and 26 March 2009 with many different activities!

As usual, the French snacks sales during recesses were very popular. This year, we had a lot of different foods to try from: cakes, pastries, croissants, garlic breads, muffins, doughnuts, croque-monsieurs and much more… Thumbs up for all the students who managed to place their order in French!

During morning assemblies, our French Stream students talked about their trip to France in 2008. They also taught the other students how to order snacks in French. The Secondary Division came to recite French poems.

We had a design competition for all students in the School. They made French theme bookmarks, postcards and posters. There was one winner in each grade. We received very creative designs and they were displayed in the school during the French Days.

There was a large exhibition about the 160 years of French presence in Hong Kong displayed at the playground. The exhibits were borrowed from the French Consulate and described different relationships between Hong Kong and France. There were stories about historical, political, scientific and cultural events between the two over the past 160 years. Students participated in a quiz about the exhibition and won prizes.

On the last day, all students received a souvenir notebook designed by the Grade 5 students who participated in the Trip to France 2008.

“With the enthusiastic participation and help from many teachers, parents and the French Stream students, once again, the French Days were a great success! Merci beaucoup à tous”
Madame Boniface 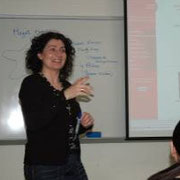 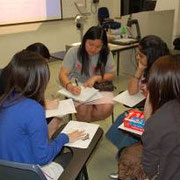 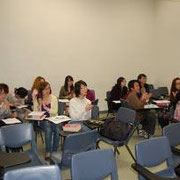 Seminar "France for you" at the University of Hong Kong

On 26th November (Wednesday), Mr. P. Prashanth, Head of the CampusFrance Office of the Consulate General will present the French Education System to the students & professors of HKU.

During this one-hour presentation, Mr. P. Prashanth will talk about "France today" and why one should choose France for higher studies. He will also elaborate on French Higher Education and introduce the opportunities of the Erasmus Mundus programmes & scholarships to HKU students. The Consulate General’s scholarship programme - Alexandre Yersin scholarship - will also be presented. A brief idea of cost of living in France will be discussed and this presentation will end with a brief information session of the Student Visa proce

Following this presentation, there will be a sharing session with HKU students who have studied in France previously.

All are welcome. No registration required.

Bringing a truly cosmopolitan atmosphere to the HKBU campus, the 4th International Festival co-organised by the International Office, the Language Centre and the Office of Student Affairs of the Hong Kong Baptist University from 21st to 23rd october 2008.

The fun-filled carnival featured a global village, a variety show, an international market, a Chinese dumpling-wrapping competition, an English-speaking contest, a lecture on U.S. pop culture, and a photography exhibition entitled “Unrevealed Beauty: The incredible landscape of the Dead Sea” (brought by the Consulate General of Israel)

CampusFrance Office of the Consulate General was represented by Mr. P. Prashanth (Head) and Ms. Vivien Leung (French May Officer) who promoted France and its Higher Education System during this one afternoon festival.

Ms. Marlène Chassang represented Alliance Française de Hong Kong who organized Quizz activity and issued prizes (books, French music CDs, T-Shirts) for the winners. This was indeed a great success as many students wanted to test their knowledge about France.

Two French students in CUHK campus from HEC Paris on exchange programme were also present and distributed the brochures of their institution. 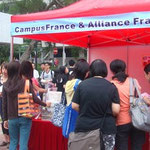 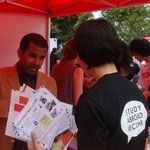 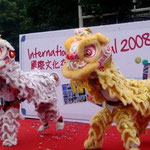 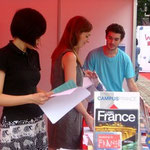 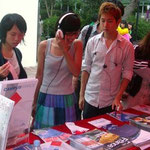 The handball competition starts with the girls.

However despite the French battling hard, Canada wins!

At the French Café, the girls are having chocolate cake.

The boys are trying croissant and “pains au chocolat”. Yum!

Even the teachers enjoy the relaxed atmosphere.

Whereas the waiters are working hard.